The Human Microbiome and How it’s Affecting Your Health

In the past few years, science has been spooking us with the prospect of AI taking over so that we all eventually become half-human/half robot. But the reality is that trillions of tiny creatures called microbes are one step ahead. These clusters of bacteria are already living inside of us and forming part of our DNA. In fact, your body contains more of these bacterial cells than human cells!

When you hear the word “bacteria” your mind probably goes straight to illness, lack of cleanliness, and that kind of thing. Bacteria just isn’t a word many people hear in a positive context, especially when you think of the illnesses we associate it with, such as the dreaded MRSA bug. But science has started to look at bacteria in a whole new way thanks to growing evidence of the positive impact that microbiome can have on your body in a number of ways. This microbiome actually play a massive role in your health and are often referred to by scientists as another organ. Just like your gut is often referred to as your second brain.

What Exactly is Microbiome? All of that bacteria in your body has some “lovely” neighbors too; namely, viruses and fungi! Alongside bacteria, this group is known as your microbiome. You’ve probably also heard of the term “microbes” and which refers to these bacteria, fungi, viruses, and other microscopic living things. There are trillions of these microbes in your body and they mainly exist on your skin and inside your intestines. The microbes found in your intestines reside mostly in your large intestine and these are what we refer to as your gut microbiome.

No two people have the same gut microbiomes, and this variability is why people can often have different reactions to the same foods. Your intolerances and allergies can often be pinned down to your own individual microbiome.

Microbiomes and Your Diet

The food you eat greatly affects the diversity of bacteria in your gut. Your diet has a massive impact on your gut microbiome and the composition of your microbiome can be directly affected by what you do or don’t eat. Scientists recently conducted a study on mice that showed that switching from an antioxidant-rich high-fiber Mediterranean diet to a protein and fat-heavy Western diet can change your microbiome in just one day! It’s also been proven that high-sugar diets can decrease the diversity of your microbiome within a week which may indeed indicate a correlation between your microbiome diversity and IBS and diabetes. In addition, researchers have discovered that antibiotics can cause enough disruption to the microflora of your body to cause illness or diseases.

The influence that the microbiome has on digestion is probably the most researched and best-understood area of study on this topic. In the absence of our gut microbiome, many of the foods we eat such as plant cellulose, found in fruit and vegetables, would be completely indigestible. The GI tract is generally okay with breaking down easy-to-digest monosaccharides and disaccharides such as glucose and lactose but it has a tough time digesting more complex molecules or carbohydrates, proteins, and lipids. This is where gut microbes can save the day. Microbes feed off these molecules and break them down into short-chain fatty acids, which are super important nutrients that your body needs for energy metabolism and regulating appetite.

Microbiomes and Your Overall Health

Your body’s first exposed to microbes when you’re born, the moment you pass through the birth canal, although some studies have suggested you can be exposed to microbes in the womb also. This gut microbiome diversifies into a number of microbial species as you grow, and this diversity contributes to your overall health in a positive way.

The majority of microbes and bacteria that form your microbiome are responsible for some super beneficial functions in your body, such as:

It is thought that the pain and bloating associated with IBS may be due to something called gut dysbiosis which occurs when the bacteria in your gut become unbalanced. This stems from the fact that the microbiome produces a lot of gas and numerous other chemicals which can lead to intestinal discomfort of IBS. However, this is easily rectified by restoring the balance in your gut and it is well-documented that taking probiotics can reduce IBS symptoms.

Recent research also suggests that your gut microbiome can affect the central nervous system which is responsible for controlling your brain function! The gut-brain connection is so strong that a number of new studies have even shown that probiotics have the potential to help with mental health disorders such as depression. In addition, studies have noted that specific species of bacteria can help to produce neurotransmitters in the brain such as Serotonin which is a well-known antidepressant that’s mostly produced in the gut.

So basically your second brain (your gut) is watching out for your first brain to make sure it performs at its best!

To wrap things up, let’s look at how you can start looking after your gut microbiome right now: As humans, we’ve lived with these microbes inside us for millions of years and it’s debatable whether the human body could survive without them. At best, it would be very difficult. I guess you could say it’s a bit of a codependent relationship, but the good kind! Your gut microbiome is helping you out every day, so don’t forget to do your bit too. 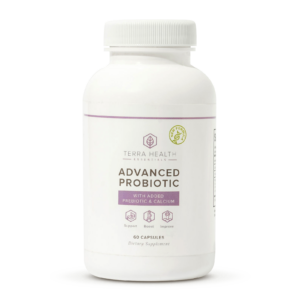 The best way to get started with looking after your gut is to add a probiotic to your diet. Our Advanced Probiotic is expertly formulated to replenish your body with the bacteria needed to main a healthy gut and immune system. Within a few days you’ll start to feel more energized, less bloated, and your digestive discomfort will become a thing of the past!

AND we’re giving our dedicated blog readers a special 30% discount which you can avail of using the code: gutbalance30 when placing your Advanced Probiotic order!