Almost half of the US population suffers from GERD (gastroesophageal reflux disease) symptoms. Acid blockers are usually the first port of call for these patients, but many of them don’t get any relief from these overly prescribed medications and are left stumped about what to try next. There are a few reasons why this situation is so prevalent so in this post, we’re going to look at how acid reflux actually happens, why acid blockers often don’t work, and what you can do to solve your acid reflux problem for good.

What Actually IS Acid Reflux?

Acid reflux occurs when the contents of your stomach travel back up your esophagus through an open LES (lower esophageal sphincter muscle) leading to painful symptoms such as heartburn and indigestion. For the majority of people, acid reflux symptoms such as heartburn are caused by an ill-functioning LES which is allowing acid to leak through. The LES is a “valve” of sorts that keeps the contents of your stomach from going back upwards into your esophagus, so it’s pretty important that it functions properly in order to avoid reflux. Here’s the interesting thing, though; when your stomach acid levels are high, this signals your LES to tighten up and close to stop acid from getting through. However, when your stomach acid is LOW, your LES starts to loosen which allows acid to escape into your esophagus and boom – reflux sets in. 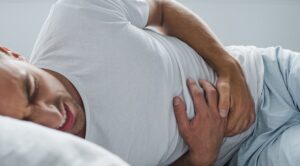 Why Stomach Acid is Important

When you’re producing enough stomach acid, your digestive system will function properly and your stomach acid will signal your LES to close. When stomach acid production decreases, this is referred to as a condition called hypochlorhydria. This reduction in the levels of stomach acid can be due to factors such as aging, stress, caffeine intake, medications (especially proton-pump inhibitors which block the production of acid), and alcohol.  It’s estimated that up to 21% of people in the 60 – 69 year age bracket, and 31% of people from 70-79 experience hypochlorhydria. This goes up to 37% in people over the age of 85. People who have other GI issues such as IBS are at a significantly higher risk of developing low stomach acid problems also.

It’s important to take this condition seriously, as stomach acid levels are vital in order for our immune systems to function properly and for optimal nutrition absorption. The digestive process starts in our mouths as soon as we consume food; the food is partially broken down by chewing (hence why we always say to chew, chew, and chew some more!) and by enzymes which are secreted in saliva. Once it’s traveled down the esophagus to the stomach, it’s further digested with the aid of hydrochloric acid which is naturally produced by your body. This helps to further extract nutrients from the food.

The Dangers of Acid Blockers

Proton-pump inhibitors work by stopping acid production in the stomach, but they don’t stop the contents of the stomach from flowing back up the esophagus. Instead, they lower the acid levels so that there isn’t much acid to flow back up. This is a short-term fix with regards to reflux, as it merely addresses symptoms and doesn’t solve the root cause of acid reflux which is that the LES isn’t closing properly, to begin with.

“Far more people with symptoms of heartburn are started on PPIs, do not derive benefits from them, and continue to use them because no one makes an effort to take them off the drugs.”

Whilst PPIs are considered safe enough as a short-term measure, the problem is that they don’t solve the problem of reflux, so most people end up on them long-term, if not for life. And this is a big concern. Studies have found that PPIs are linked to low levels of vitamin B12, reduced calcium absorption, increased risk of pneumonia, and even an increased susceptibility to hip fractures. Several studies of people who use PPIs for years have also found those participants to be at an increased risk of developing conditions such as heart attacks, chronic kidney disease, and dementia.

Even more disturbingly, a 2018 study published in Gastro Journal concluded that PPIs increase the risk of stomach cancer. In an examination of 63,397 patients for 7.6 years who had been prescribed long-term acid blockers, it was found that the longer they took the medication, the more the risk increased. After just one year, the study revealed that this risk was 500% greater than individuals not taking acid blockers.

In addition to this long list of risks, there is a dependency that develops on these acid blockers that results in a massively increased production of stomach acid once it is discontinued, which causes acid reflux symptoms to flare up in a big way. In a trial of 48 people which was published by the American Journal of Gastroenterology, it was concluded that a mere month-long course of proton pump inhibitors resulted in acid reflux symptoms when the medication was stopped – EVEN in individuals who were previously asymptomatic. In this trial, it took an average of 3 weeks for these rebound symptoms to stop.

The Symptoms of Low Stomach Acid

If you’re currently experiencing acid reflux amongst other symptoms, this overview will help you to surmise whether low stomach acid is at the core of your problem.

In the case of foul-smelling burps and flatulence, this is due to the fermentation of the food you eat as it lies in your stomach. When your stomach acid levels are low, digestion is difficult, and bacteria manage to hang around in your stomach and feast on this food which produces that inconvenient gas. Have you ever literally tasted your food in your mouth when you burp a few hours after eating? This means the food is still sitting in your stomach when it should have reached your small intestine. When this happens, bloating also sets in, food can start pushing back up through your LES – and hello acid reflux.

Betaine hydrochloride (HCL) and digestive enzymes are the most utilized supplements for treating low stomach acid. Alongside the number of functions of HCL we listed earlier in the article, it primarily stimulates the production of acid in your stomach to improve digestion and trigger your LES to seal tight, preventing reflux. With enough HCL, your acid reflux symptoms and more serious conditions such as GERD can be alleviated and resolved for good. 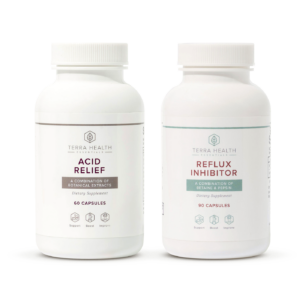 Our Heartburn Relief Kit contains a custom blend of ingredients that leads with Betaine HCL combined with Pepsin – a key enzyme to assist with the breakdown of protein. In addition to soothing ingredients such as Slippery Elm Bark to help to ease the painful symptoms of reflux whilst we work to resolve the root cause.

Just because you’ve been suffering from acid reflux for a long time, it doesn’t mean that it cannot be cured. You’ve simply been treating it the wrong way.