Most people have heard of or experienced GERD. If you’re familiar with GERD (gastroesophageal reflux) and acid reflux then you’re probably just as familiar with the burning sensation of heartburn and other painful symptoms associated with it. But there is another form of acid reflux called laryngopharyngeal reflux that often presents without heartburn, which means it isn’t quite as well known and often left untreated as a result. In this post, we’re going to talk about what LPR is, what symptoms to watch out for, and how you can treat it so that you can get back to living your life pain-free. So, What Is Silent Reflux (LPR)?

LPR is very similar to GERD in its mechanism and causal factors. Both issues are triggered by acid reflux escaping through the lower esophageal sphincter muscle into the esophagus. A common misconception is that this is a result of excessive stomach acid, but it is actually a result of LOW stomach acid. Your lower esophageal sphincter muscle gets the signal to close after you eat from the correct levels of acid in your stomach. When there isn’t enough of this acid present, the LES doesn’t close, and acid travels up into your esophagus causing reflux. The difference with LPR is that the acid refluxes the whole way up into the throat area, which causes different symptoms to the regular GERD patient. This reflux causes damage as it moves upwards including inflammation and irritation to the airway with issues arising in the nose, sinuses, throat, voice box, and even the lungs.

The LPR patient generally doesn’t experience the symptoms of heartburn and chest pain that are closely correlated with GERD, and this is why it’s referred to as “silent”, however it can cause significant discomfort so it is most definitely not “silent” for the majority of people. The problem is that common misdiagnosis due to lack of common GERD symptoms means that many people aren’t aware that they have the condition at all until the later stages (if ever). This is quite dangerous as it can lead to serious illness such as laryngeal cancer.

LPR Symptoms To Watch Out For

Although it doesn’t usually present with heartburn, LPR does present with a number of symptoms due to the acid damage in the throat and esophagus.

People with LPR can experience symptoms such as:

Adapting your diet to “reflux friendly” foods can definitely help to manage your LPR symptoms, however, this doesn’t resolve the problem at its core, and as soon as you start eating those foods again your symptoms will likely come back. However, anything that helps is obviously a bonus – so it is worth keeping a good diary to identify your trigger foods and avoid them where possible. In LPR, these foods are commonly high-fat, sugary, or acidic.

You’re probably wondering why you need to “avoid” acidic foods if the problem is low stomach acid, right? The answer to this comes down to the very reason why adapting your diet treats the symptoms but doesn’t actually resolve your acid reflux. When you adapt your diet to make it less acidic, you’re sticking a band-aid on the problem. There’s less acid in your stomach to get through your open LES, so that’s a win, BUT you’re not treating the main problem – which is that your LES shouldn’t be open after you eat in the first place. If your LES was performing optimally, it wouldn’t matter what you ate.

In the long-term, silent reflux is best treated by addressing the root cause, which is most commonly the exact same thing that causes GERD: low stomach acid. By adding supplements to your diet to increase acid production, you can get your lower esophageal sphincter muscle working properly again so that it closes completely after you eat and you don’t experience reflux at all anymore. This is what we do with our Heartburn Relief Kit which does exactly what it says on the tin. 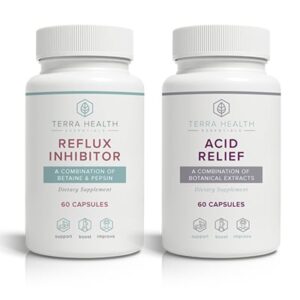 Get Relief From Silent Reflux Today

Our Heartburn Relief Kit contains a Reflux Inhibitor to resolve your acid reflux completely, and an Acid Relief supplement to provide extra relief from symptoms during this process.

AND… we’re giving all of our blog readers a 30% discount on our products to help you get started on your journey to managing your LPR! Use the code: lpr30 when ordering to avail of your discount.