Turmeric has been used for centuries in traditional Indian and traditional Chinese medicine. The spice’s healing power is derived from its active ingredient, curcumin. It’s said to help with everything from pain relief to heart disease prevention.

Curcumin’s powerful healing properties have been well established for centuries in many parts of the world. However western medicine, which continues to be largely controlled by large pharmaceutical companies, continues to look at this all-natural wonder with a skeptical eye. One has to wonder however if it’s because they are in fact skeptical of 100s of years of use, or if it’s because it might not be in their best interest for there to be an affordable, all-natural alternative to prescription medication?

The Case For Using Curcumin

The research around curcumin is promising. Participants in one 2004 study took tablets of curcumin extract every day for eight weeks. They reported less abdominal pain and discomfort, as well as a boost in perceived quality of living.

Researchers in a 2010 animal study  investigated curcumin’s potential to treat anything under the gastrointestinal disorder umbrella. After one dose of curcumin, the rats used in the study experienced a decrease in the length of their small intestine. This suggests that curcumin can alleviate abnormal intestinal contractions.

This research leans heavily towards showing that curcumin could be used to treat IBS and other ailments, such as diarrhea and abdominal cramps.

Research as recent as 2015 continues to highlight the varied healing potential of curcumin. This animal study looked at the effect of curcumin on IBS, as well as on the mood disorders that often accompany it, such as stress, anxiety, and depression.

Researchers found that curcumin increased the levels of certain proteins and neurotransmitters in the rats’ brains that influence mood. The rats who received curcumin also showed improved results in behavioral tests.

Curcumin also had a positive effect on the rats’ intestinal system. It’s thought that the proteins and neurotransmitters that signal the brain may also signal the intestines.

How To Use Liposomal Curcumin For IBS

Turmeric (which curcumin is derived from) is a popular spice in Indian cooking. So there are many delicious ways to work natural consumption into your diet. However, it is very hard to extract the actual curcumin part from the Turmeric, which contains the healing properties. As little as 3% of turmeric that you consume while eating, contains curcumin.  One estimate says that you would need to consume over 20,000mg of Turmeric every day to consume enough curcuminoids to get the anti-inflammatory & healing effects shown in these studies. That would literally be like eating 5 spoonfuls of one of the strongest spices in the world every day. That doesn’t sound very pleasant.  And even after that, it does not account for the quality and bio-availability of the curcumin.

Despite curcumin’s seriously impressive health benefits, it tends to be poorly absorbed by the body – making bioavailability a MAJOR issue. Bioavailability is the amount of a substance that actually enters your bloodstream so you get the health benefits you’re looking for. Without it you’re just wasting your money.

At Terra Health Essentials, we’ve found the solution. Our Liposomal Curcumin has 5 times the bioavailability of standard curcumin. That means your body retains 5 times as much of the benefits as it would with curcumin capsules. Pretty amazing isn’t it? 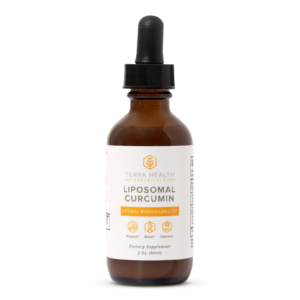 If you don’t like our Liposomal Curcumin for any reason:

There is no reason that will be denied. But we firmly believe that you will love our Curcumin formula so much, that not only will you not want to return it, but instead, you will be coming back for more!

And just in case that isn’t enough to convince you that Liposomal Curcumin might be worth a try, we’re going to give you an additional 25% OFF and Free Shipping on your first order. Just use promo code: FIRSTORDER25 and the discount will automatically be applied.